My Decision To Go Back To Paracelsus For Lyme Disease Treatment 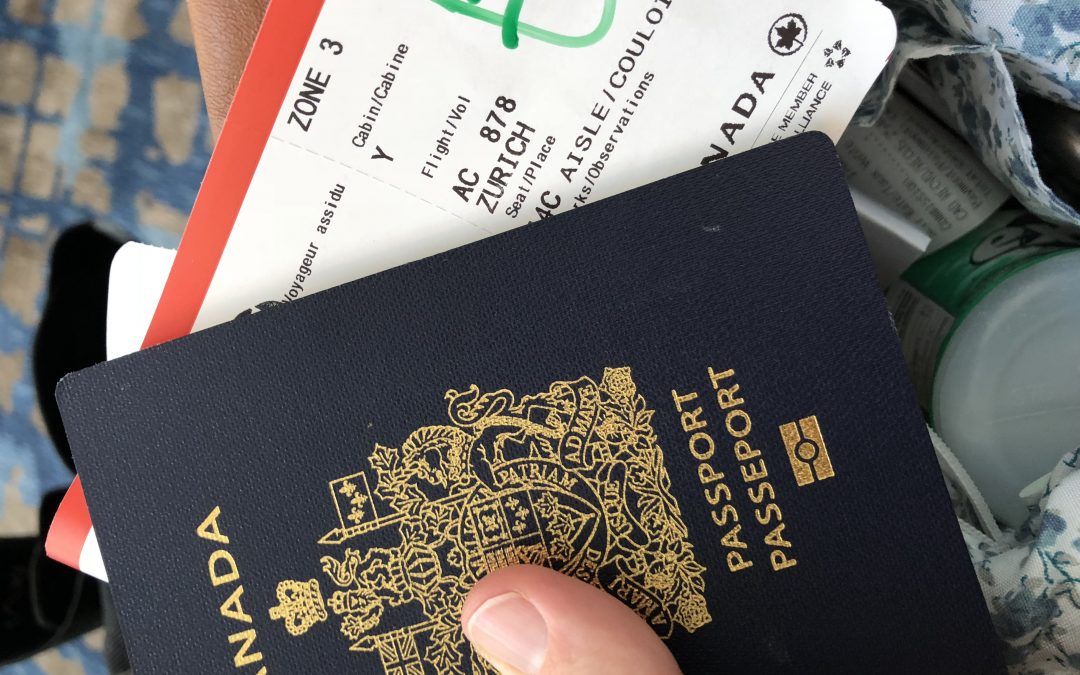 This Lyme Disease update will be quick, mostly because I am short on time and perhaps don’t have a lot to say? I wrote an update in May about how I’ve been doing, which is still very up and down.

Whenever someone asks how I am, my answer is always “up and down”.  In terms of my current treatment there isn’t too much going on. After returning from Paracelsus I had a lot of issues, including new ones.  Two months ago my body held out on me and my period came 18 days late; this is something that has never happned before.  A few months back during one of my monthly phone call appointments with my doctor at Paracelsus he felt I was having an “endocrine crisis” and this was another bit of evidence to support that.  Even when my health was at its worst in 2016 my period still came on time. Having missed so many days seemed so strange.

I’m definitely better off than I was two years ago when I couldn’t walk or even hold my head up some days.

Through all the mess my Lyme-life was upon returning from Paracelsus they decided I should stop most of my meds. Up to this point there have been adjustments here and there, but to summarize my current treatment protocol I can tell you I do IV infusions twice a week, so have a catheter in my arm for three days of the week, then freedom for the next four days before it starts all over again. 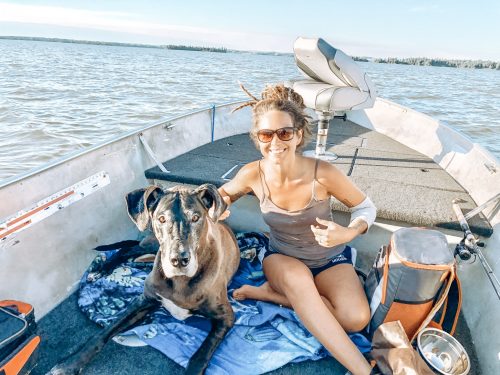 with an IV line in my arm, covered with a fabric sleeve for protection

I spoke with my doctor from Paracelsus once a month from March until June. When we last spoke in June I’d been doing poorly for a while and I could hear the disappointment in his voice; I knew he was expecting my body would have taken a turn for the better, not worse.

My original plan was to head to Paracelsus near the end of the year. I had made no any solid plans for it–I think because, in all honesty I didn’t want to go. Just the effort alone to get there is difficult for me. When I spoke with my doctor in June, he felt it was best for me if I came sooner than later. He felt that my immune system just wasn’t working.

There is a balance that our body should be able to maintain, it can keep us healthy from invading germs if there are no underlying issues within our bodies. Studies have even shown that some people test positive for borellia (the bacteria causing Lyme) but show no symptoms; their body can handle the bacteria and keep it from taking over. This is what my body failed to do.

Through my 500 days on IV antibiotics we killed a lot of the infections, not just Lyme, but Babesia and Bartonella too. Then came a point where it felt as though I was killing as much of my healthy cells and tissues as we were killing the infection; that is when I stopped antibiotic treatment. 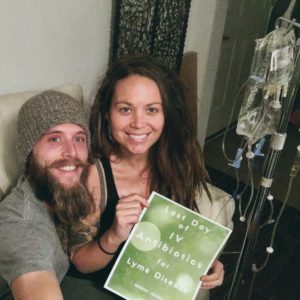 The answer I’ve heard most from listening to various doctors, or reading what they’ve written is no. To kill and be certain you’ve killed the infecting microbes, you’d have to kill the host too, and in this case–I am the host. This means that though the antibiotics killed a lot of the infection once I stopped them it became the responsibility of my body to keep up the fight.

The bacteria are stealthy and can trick the immune system to ensure their own survival. Top that off with my immune system being weak and immeasurable according to the tests done at Paracelsus, we knew it would be a heavy task to rebuild my immune system so it can take over the role the antibiotics had played.

Based on the last few months and what I’d explained to my doctor he felt that my immune system wasn’t doing much for me. With that, the result is bacteria that can multiply and grow, risking a serious relapse.

This is why he was so solemn when we spoke and encouraged me to return as soon as possible so we could come up with a new plan.

Hearing this was hard for me. I felt broken when I got off the phone. When Stephen got home that night we discussed it and agreed that it is better to keep on top of things rather than allow me to deteriorate and have to regain the ground we’ve already covered.

As I mentioned in my earlier blogs about Paracelsus, I had a team of three doctors. Two of the doctors are now gone, which–for me does not matter as I would have argued against seeing one of them again. The doctor who remains at Paracelsus was my favourite, and he is incredibly smart, going back just to see him would have been worth it… I have a lot of trust in him.

But there is a new doctor.

In May I received the Paracelsus newsletter introducing the new doctors. When I saw Dr. Richter’s biography I knew going back to the Clinic would be worth it. When they had a turn over in the staff, doctors left and new ones came in. One of the new ones had a long battle with Lyme Disease himself. Him and my other doctor will work together with me this time.

This is an excerpt from his biography

After completing his studies in human medicine in the late 1980s, Uwe Richter’s medical career began as a radiologist. In 1992, he turned his attention to new economic challenges when he realized that as a radiologist he would not be able to meet his high goals of a holistic approach.

As an innovative entrepreneur with executive responsibility, he built up various medium-sized companies in the following years and managed them with great success.

In the period 2010/2011, he suffered from severe burnout with associated depression and chronic Lyme disease. He was completely incapacitated for work from that point on and had to retire completely from working life for several years.

He could not put up with this heavy blow and the associated, deep case and turned to one of the most renowned molecular physicians (internist) of Germany, Dr. med. Ulrich Strunz, u.a. known as running pope by forever young.

With the help of a micronutrient therapy and his prescribed running training, Dr. Strunz back to a healthy, energetic life.

The treatment by Dr. med. Strunz was a decisive turning point in the life of Uwe Richter. As a doctor newly inspired and motivated, he retreated completely from business life in 2012 and devoted himself, tirelessly and very successfully, to studying, learning and training, in order to be able to practice again as a licensed physician, his actual vocation. Since 2013 he runs a practice and day hospital in Berlin (Quickclinic).

He has further developed the concept of (ortho) molecular medicine, because not only the right substances (micro and macronutrients) belong to the healthy body but also an excellent detoxification and a functioning repair of the body cells. And, just as important in the central process of a healthy body are excellently functioning mitochondria (energy power plants of the body).

In two days we will leave for Switzerland. This time my husband will stay the entire time with me, as we will only be away three weeks instead of seven weeks like last time. It isn’t easy for him to leave work for this long, but it was important for me he could come this time. My last visit was incredibly hard, physically and emotionally.

We will be home in early September, only to have to turn around and leave again to see a doctor for insurance purposes, I am keeping my fingers crossed that he is open minded and receptive. I also imagine all the travel to and from Switzerland, then back out again will take its toll.  Everything leading up to this trip back to Paracelsus, and now this upcoming visit with the ID specialist has left me popping Ativan throughout the day while I try to keep up with everything and pack.

So, after I told you this would be short and sweet–it turned out to be really, really long. We’ll be arriving home and then turning around to see this specialist and I am keeping my fingers crossed that he is open minded and receptive. I also imagine all the travel to and from Switzerland, then back out again will take its toll.  Everything leading up to this trip back to Paracelsus, and now this upcoming visit with the ID specialist has left me popping Ativan throughout the day while I try to keep up with everything and pack. Nothing has come easy this week, I had symptoms flare up that left my hand to look like there was a small plum looming beneath the surface because it was so swollen. My other arm was in lock down with an IV line in it for three days.  Today I am free of both, my symptoms subsided after this morning’s IV. 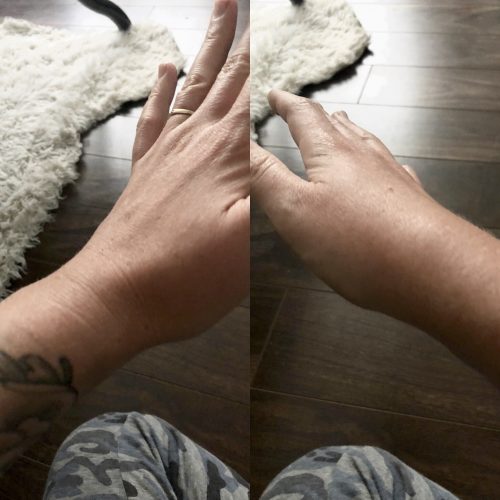 This shows the swelling that happens in my wrists. On the left you can see my wrist is (mostly) normal, but on the right it is swollen so that my wrist is the size of my forearm.