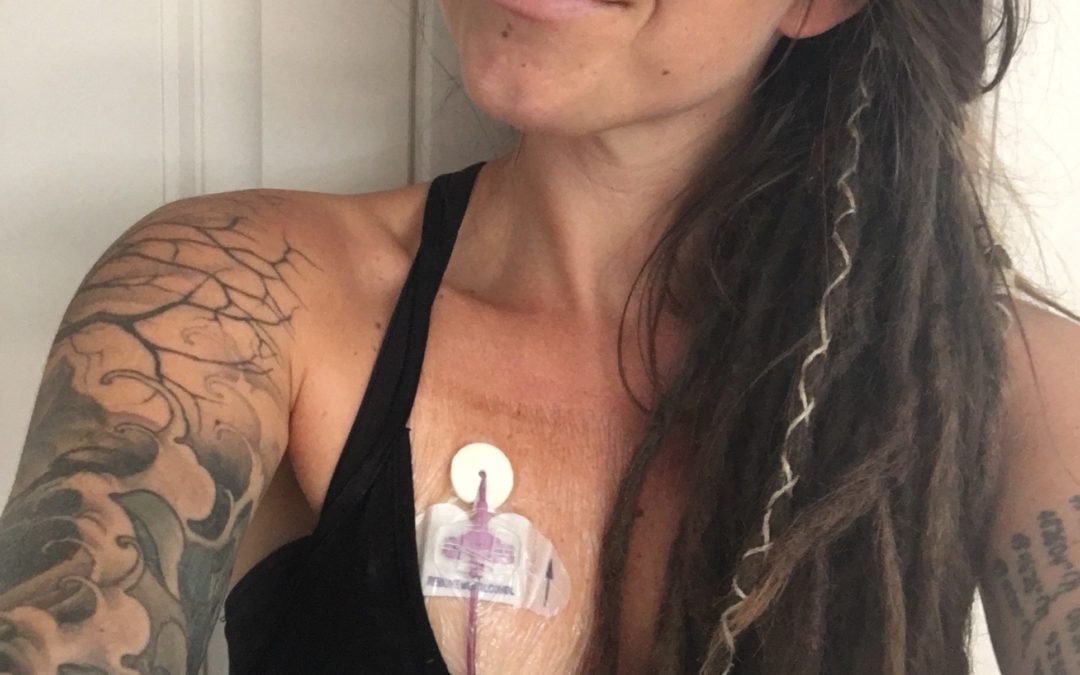 It’s after midnight and I can’t sleep. This isn’t typical of me. The last few weeks I’ve worried a lot.

I’m at a crossroads. I’ve been on IV antibiotics since June 6, 2016… I started 498 days ago. Keeping in mind I had to pause my treatment once to re-stabilize my body, that was three months off IV meds, but my IV line has remained in and fortunately I’ve had no issues with it.

As much as this is a physical battle of the body vs borrelia, it is mental too. I lost the mental battle and I am halfway there physically. The week of September 18th I reincorporated an antibiotic back into my protocol that I hadn’t been on since January 2017. It has always made me (and most others who’ve taken it) sick as f*(k.

There’s no polite way to say that.

I ran my first dose in months of this nasty, vile, yellow liquid about three hours earlier and I swear every minute ticking by is one minute closer to me making a mad dash to the bathroom to puke my guts out.

With a great prelude to a post … you must be nothing but excited to read more, right? (I’m joking, obviously)

What do you do when you can’t keep going?

Make a choice. Make a really hard and informed choice.

I instinctively felt that traditional western medicine would bring me part of the way back, my plan was always to only go so far with antibiotics – I’m that far, and a little beyond. Maybe the reason I’m so over it is because I’ve made my mind and I do not want to continue with pharmaceuticals anymore… or most likely it’s because my brain is screaming at me.

I don’t feel like my will is strong enough anymore. Even just feeling moderately under the weather seems to be so much more difficult, and right now moderate isn’t the word to describe this feeling while I await the impending mad-dash to the toilet to puke my guts out.

Another 5 minutes have gone by… I’m slowly eating a bun; and now half way into it I wonder if I should have made the choice not to eat? At the time I thought it would help. Now I am regretting it.

It’s been 15 minutes since I started to write. In those 15 minutes I was not able to finish that bun. I hovered over the toilet unsure if I was about to toss the half that did go down back up. I’ve taken a Zofran (a med used for nausea), and I’m waiting not very patiently for it to help me out a little.  At this point I am actually tired and would love to sleep for 5 hours before I do this all over again.

Throughout the rest of October I will be (trying) to complete another med cycle.  The last one was so incredibly hard that I might be a quitter on this last round. How am I feeling right now? My mother-in-law asked me that question the other night over Thanksgiving Dinner, I replied,

Through the last round I was vomiting in such a way I managed to lose my voice from the acid burning at the back of my throat, like fire on its way up.  I’ve gotten to the point just looking at my IV pole brings on a wave of nausea (I added a video-blog the day after fire-like bile spewed out of me – you can click to watch it here or just keep scrolling to read  more)

I asked my family doctor to send a referral to our local surgeon to have my central line removed.  My best guess is that when I see my Lyme-Doc at the end of the month that he would give me some great news that I will be able to move on from IV antibiotics, but I can’t wait until that appointment to get that news.  I see the surgeon at the end of the week for a consult and with any luck this foreign purple tube coming out of my chest will finally be evicted.

I’m not sure what my appointment on November 1st with my Lyme-Doc will bring.  My biggest concern after the last round of IVs is over, is that my body needs a break.  My intutition is telling me to give it a break and then stick to minimal antibiotics to “babysit” the infection while I regain my body and my mind.

The weight of these last three years fell on my shoulders sometime over the course of this year. I’m not the same. I know the person I was is inside still, but I’m hidden under a veil that is obstructing how I see things. I’ve tried… I’ve tried to get into a routine, I told myself I’d start journaling… there has been a voice in the back of my head telling me to talk about it for a long time now.  Last week I finally listened to that voice and called to make an appointment with mental health services.

Mental health is still something that doesn’t get talked about enough. I felt awkward at first even telling friends and family that I made this appointment, but I got over it quickly. Mental health and Lyme doesn’t get a lot of recognition; when you look through online Lyme groups people talk about their symptoms, and it is always the physical stuff. Rarely does someone mention the mental and emotional feelings theyre struggling with.  We know the infection itself can cause personality changes, depression, anxiety, etc.  But without placing blame on the infection, being sick for a long time, or sick with a serious illness is hard and coping isn’t easy. 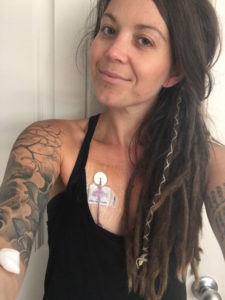 I coasted through it for the first couple of years and now I have a lot of anxiety. It happens for no reason, or for small reasons.  Basically, it just happens. I try to take deep breaths and work my way through it while I feel it reaching up inside of me choking the air out of my lungs.  When I was in University I had a tendency to have one massive panic attack per year. I’d choke and gasp for air, cry – but mostly the dry tears that just burn at the corners of your eyes.  These days when I get anxious I can tell I am teetering on that edge. I close my eyes and feel myself starting to choke; recognizing it right before it happens helps me to calm down before it gets the best of me.

Being overwhelmed. It could be that I’m more tired than normal, my hemoglobin and other lab markers are improving … but I’m still tired.  I find I end up sitting doing nothing, staring with no purpose at my phone and hours pass. I’ll leave a simple phone bill unpaid for weeks because the thought of logging into my bank account and paying it seems like so much work.  Things like this pile up, compounding on each other.

(On a side note, today I did accomplish something big! I submitted my receipts for the IV meds to my insurance company and got a bit of money back, but something didn’t look right so I compared the receipts to the claims for the last 13 months; BIG check off my list. BIG reminder of the blow to our bank account.  In those 13 months the meds alone came to $67,000 and we got $7000 back, roughly 11%)

Last but not least, sadness.  Who isn’t sad from time to time? This is a kind of sadness I don’t have experience with… maybe I’m mourning the active life I once had.  I’m sure it is a number of things. I’ve purposely removed myself from social media for days at a time, not wanting to watch what is going on outside my house from my tiny iphone screen.  Speaking of outside the house… now that I’ve been in here and off work for nearly two years I’ve become a bit of a hermit, unintentionally.  Going out of the house and being in public gives me anxiety, I find interacting with other people in busy environments overwhelming. Slowly I’ve been trying to reintegrate myself with the rest of the world, taking advantage of the really good days I’ve had when I am off meds to talk my dog for a walk.  He’s been beside me the whole time, he is an almost 8 year old Great Dane and has always liked his walks, but now that he is older he hasn’t given me grief over the fact he leads a pretty lazy life now – but I feel a pang of guilt for how the last two years turned out for him too. We went from walking and jogging 4-6 times per week to nothing.

As I ramble on and look at the page count coming close to page 4, I realize I need to sum it up

We’re going to make the best of the trip back to DC and change things up a little (and I am REALLY excited about it!). We’re flying into NYC and spending 24 hours there before taking the train to DC. Our time in DC will also be a short 24 hours because Stephen needs to be back for work… and it will be a busy couple of days – but it is something to look forward to and that is something we all need in life. 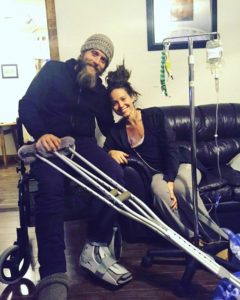 Unfortunately, between when I drafted this and got around to posting it Stephen broke his ankle. He was flown out to a larger hospital and had to have surgery. He is now the owner of a plate and five screws.  Our travel will be interesting to say the least.  Daily routine looks so freaking weird in our house right now – and it is cluttered with walkers, crutches, IV poles and med supplies.

When I write the next update it will be after my appointment and at that point I’ll share some big changes that I’ve made and committed to. Big, scary, exciting changes that I am thankful to my family and a certain friend of the family for; they propelled me into motion and gave me the push and support I needed to make a change.

By the way, if you’ve been to NYC and have any “must see and do” ideas, let me know! Restaurant suggestions are always great too, one of my favourite things in new cities is the food!